Reflections on a Fabulous Night

Last night, Laura Robinson, Benjamin Lefebvre and I gave a talk at the North York Central Library in Toronto, Ontario, The Canadian Home Front: L.M. Montgomery’s Reflections of War. I hadn’t been back to that branch in quite sometime and it was fun to speak at a library I had used so often when I was in High School.

The turn out was fabulous. We had over 75 people in attendance, which also means that they had to add two more rows of chairs! Sharon Andic, Senior Department Head for Children’s Books, was so fabulous, making sure we had everything we needed and is responsible for bringing the exhibit to the library.  She helped Laura with her exhibit, complimenting it with some pretty book displays. They even served sweet raspberry cordial.*

Laura went up first. Her lecture,

“The Canadian Home Front: L.M. Montgomery and the First World War,” discussed the origins of her exhibit, highlighting some of the themes and experiences Montgomery explored in Rilla of Ingleside; in particular how women across Canada helped in the war effort during World War I. I’ve seen Laura talk about this many times and every time I see something new. 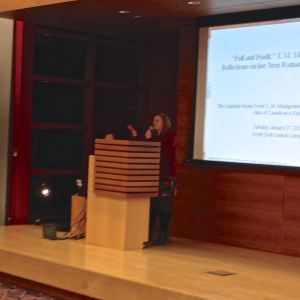 I was up next, discussing some of the things I’ve been considering while writing the novel. “‘Full and Frank:'” L.M. Montgomery’s Reflections on Teen Romance and Writing,”** gave me a chance to talk about Montgomery’s first two boyfriends, Nate Lockhart and Will Pritchard, as well as how she was exploring and learning to write as a teenager. I keep coming back to this idea of choice between what society was expecting her to do (marry) and what she wanted to do (write.)

Last up was Benjamin Lefebvre. His lecture, “Reviewer’s Reflection on L.M. Montgomery’s War Books,”  highlighted some of his research from The Montgomery Reader: A Legacy in Review that released this past month. He pulled out reviews on the books published during the war years, Anne of the Island, Anne’s House of Dreams, and Rainbow Valley and then showed how reviewers responded to Rilla of Ingleside. The slide here is a quote from Kingston’s Whit Weekly which said in its review of Anne of the Island about how many “books deals with the sex problem,” Anne of the Island doesn’t. We aren’t quite sure what it means by “the sex problem,” but we are certainly curious.

Here’s we three after the talk and Q&A. There is always that feeling of exhilaration when one is done.

Thanks to Laura, Ben, Sharon, the TPL, and everyone who attended for creating such a lovely evening.

*Special thanks to Yuka Kajihara for giving me permission to post some of the photos she took last night. 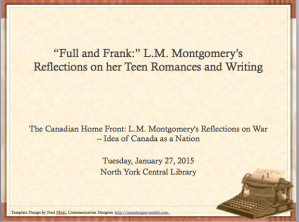 presentation based on photos I had taken of the journal cover I had created inspired by Montgomery’s journals. You can see his work at: http://nsmdesigns.weebly.com

6 Responses to Reflections on a Fabulous Night