An Interview with Benjamin Lefebvre 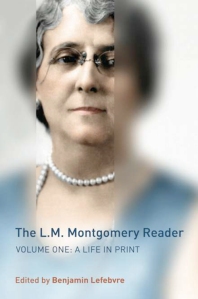 Benjamin Lefebvre’s resume is deeply impressive (see his bio below) and his passion for bringing all of L.M. Montgomery’s work and publications about her to the public has led to this outstanding first of three volumes, The L.M. Montgomery Reader. Volume One: A Life in Print. (Volume Two: A Critical Heritage is to be released this Spring.)

This collection is not only exciting for those of us who are interested in L.M. Montgomery and her work, but it is also a fascinating look at the construction of an author, how the media could shape someone and how someone can shape themselves. It also gives us an interesting look at the history of publishing in Canada and the United States, Canadian authors during the early 20th century and probably so many other things I haven’t even thought of. I’ve already found it immensely valuable in my own work and  I know that others will as well.

I’m thrilled to have Ben here as a guest on my blog to answer a few questions I had about the series.

Mel: The L.M. Montgomery Reader, Volume 1: A Life in Print is the first of a three volume “set” that you’ve spent the last number of years compiling. Can you outline what is in this particular volume and what we can expect in the next two books?

Ben: The purpose of the three-volume set is to offer a comprehensive account of the ways in which Montgomery marketed herself as a celebrity author and how she and her work were received throughout her lifetime and continue to be received in the seventy-plus years since her death. Volume 1 contains eighty essays and letters by Montgomery, interviews with her, commentary on her work, and extensive coverage of her death and funeral. Volume 2, A Critical Heritage (which will be available this spring), considers a number of turning points and milestones in Montgomery’s posthumous life, including the ways in which the publication of her journals in the 1980s radically altered people’s perception of the woman behind the legend. Volume 3, A Legacy in Review (due to be published this coming fall), includes four hundred or so reviews of the twenty-four books that Montgomery published in her lifetime, along with an overview of reviews of twenty-four additional Montgomery titles published after her death.

Mel: What were some of your favourite pieces that you discovered in your research and why? Were there any challenges that you came up on while looking for these works?

Ben: Several pieces that are particular favourites of mine are ones in which Montgomery talks about writing: not only her rationale for choosing some forms of subject matter over others but also her creative process. She goes into far more detail in these essays and interviews than she typically does in her journals. One point she made over and over again was that aspiring writers should write about the lives they know. This is certainly a secret to her own success as a novelist but also something she advocated for the development of a robust Canadian literature.

Mel: Were there any particular articles that you were pleasantly surprised by?

Ben: Montgomery wrote four nature essays that were apparently inspired by her attachment to her beloved “Lover’s Lane” near her home in Cavendish. As fate would have it, they were published in 1911, just as Montgomery left Prince Edward Island and settled in Leaskdale, Ontario, as a minister’s wife. I had known that Montgomery reused portions of them fifteen years later for John Foster’s nature books in The Blue Castle, but what I eventually uncovered is that portions of those PEI essays—a phrase here, a few sentences there—made their way into virtually all the novels she wrote in Ontario. Rather than recreate images of PEI nature after she had left the Island, she relied on these essays—over and over again, from The Golden Road to Anne of Ingleside—as an authoritative source.

Mel: People associate so much with Anne of Green Gables and L.M. Montgomery. What do you think it is about the author and her work that keeps people so engaged?

Ben: Part of the reason for Montgomery’s continued success is that her books appeal to a wide cross-section of readers in a variety of ways: her eccentric (yet relatable) characters, her descriptions of the natural world, her sense of humour, her insistence on happy endings, and her depictions of child characters, heterosexual romance, same-sex friendships, and small communities. Prior to the publication of Anne of Green Gables, Montgomery went through an extensive apprenticeship period, contributing hundreds of stories and poems to North American magazines. Throughout this period, she trained herself to write for a market while maintaining her own ideals. She learned how to appeal to as broad an audience as possible, and clearly this is shown by the fact that, for over a hundred years, readers of all ages, gender identities, and backgrounds have continued to read and reread her books.

Thanks again to Ben for taking the time to answer some of my questions. I hope that you found it as interesting as I did.

Benjamin Lefebvre received his Ph.D. from McMaster University and is director of L.M. Montgomery Online. He prepared an edition of L.M. Montgomery’s rediscovered final book, The Blythes Are Quoted (Penguin Canada), and co-edited a restored and annotated edition of Rilla of Ingleside (Penguin Canada) and the collection of essays Anne’s World: A New Century of Anne of Green Gables (UTP). His most recent book, The L.M. Montgomery Reader, Volume 1: A Life in Print, is the first of a three-volume critical anthology that offers a comprehensive account of Montgomery’s public career and posthumous life. He can be found online at http://roomofbensown.net.

My novel, MAUD: A Novel Inspired by the Life of L.M. Montgomery was published in 2017 through Penguin Random House on April 25, 2017. I hold an MFA in Writing for Children and Young Adults from the Vermont College of Fine Arts. Here I talk about my writing process, things I love, and creative people who inspire me.
View all posts by Melanie J. Fishbane →
Image | This entry was posted in Authors, Blogging, Children's Literature, Inspiration, L.M. Montgomery, Talented Friends, Writing and tagged anne of green gables, Authors, Benjamin Lefebvre, blogging, blythes are quoted, book publishing, book reviews, Inspiration, l.m. montgomery, L.M. Montgomery Reader, Montgomery, publishing, Writing. Bookmark the permalink.

3 Responses to An Interview with Benjamin Lefebvre